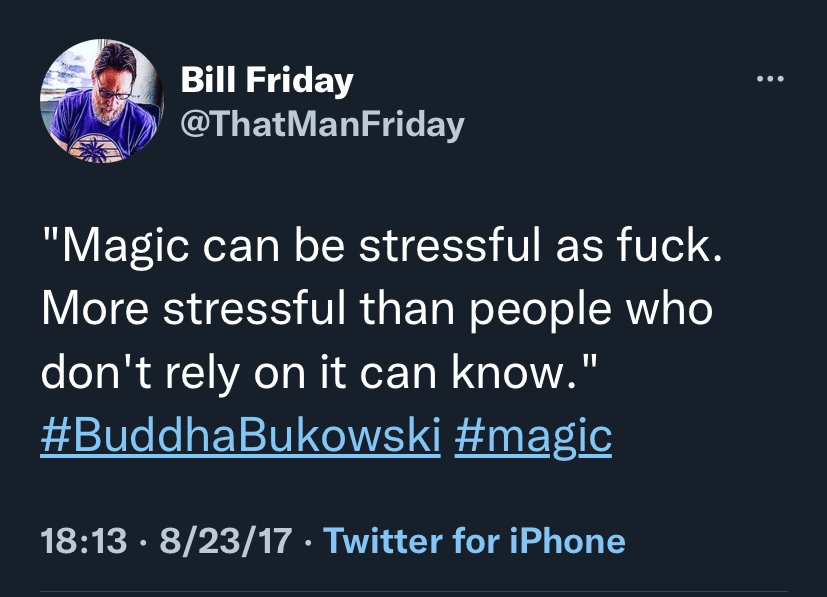 I once wrote, “Magic can be stressful as fuck.  More stressful than people who don’t rely on it can know” (August 23, 2017).  In the years that followed that adorable tweet, I went from this tenuous-at-best belief in magic, to no belief in magic at all.  But now, I may have learned the most important lesson magic ever shared,

“I have only magic enough for me”.

I will spare you all the nonsense and double-talk, smeared on society’s cage bars like angry gorilla feces at the zoo, about “the magic in all of us”, or “the way of the empath”, or any other such crap that South Asian-appropriating white saviors and plagiarist self-help gurus fling around the internet, and simply say that I, in whatever way you wish to define it, still do believe in magic.

And it is in short supply.

I mean look, I’m writing a blog post for the third day in a row, for the first time in almost two years, so there’s got to be some magic in that.  But I’m not talking about “magic” being magic that science hasn’t explained yet, because I can directly attribute the magic of three consecutive days of blogging to the science of coffee, as easily as something involving the mystic arts of word alchemy.  One person’s magic is another person’s French roast.  What I think I’m saying is, I have only enough of myself left to take care of me.  Where I used to exhibit seemingly-infinite patience for the wellbeing of others, I now equate caring to a chore.  And it’s not that I’m faking it when I lovingly engage with others, it’s that after, it feels like my soul needs a nap.  Like a three-year-old needs a nap after cookies and juice.  Like a mother of two preschoolers needs a nap while sitting on the toilet.  Probably like God needs a nap in the two minutes between the end of evening news and Jeopardy!.  Really, I swear, if I am there for you, I am all the way there.  But if I’m not there, I’m using all my magic on me.

And I know I’m not the only one.

You have magic, too.  You have magic, and you use it every day.  On those you love, on total strangers, even if just not to punch them as you buy gas at the corner Valero station, and on those you see in need who, for whatever reason, are not using magic on themselves, when they so desperately need to.  I see you, if only because I have seen me, first.  In a mirror, in the ragged sound of my own voice as I mutter to myself while deciding between another cup of coffee, or eating actual food.  Or in the way that sometimes, no matter who I see in need, I know my soul needs a nap before I can impart any magic, even a little, at all.

It’s okay knowing that, “I have only enough magic for me”.

So, today’s question for you is, “How’s your magic holding up”?  And, “What do you do when it runs out”?  Also, it’s okay not to answer until after you’ve had a nap. See you tomorrow.