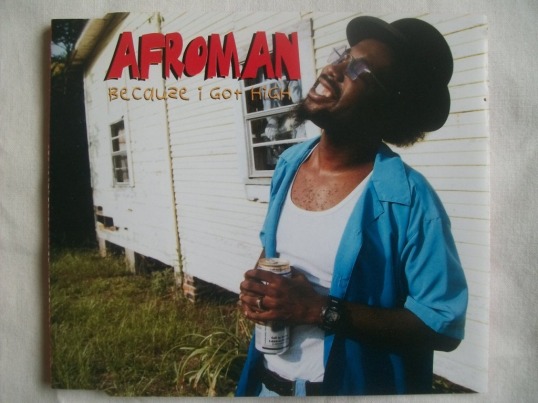 “I’m a stop singing this song because I’m high…

“Because I Got High”

Music and Lyrics by Joseph A. Foreman

“Because a writer writes.”

I wrote that in the liner of a leather-bound journal, that I gave as a gift once.  A birthday gift… to a guy I worked with, who called himself a writer.  He used to make me read his stuff.  Written long-hand, in a two inch, three-ring notebook on wide-ruled, 8 ½ by 11 paper.

At the time, I didn’t know if what I wrote in that journal was for his encouragement, or just a thinly veiled attempt at harsh sarcasm.  It’s been years now, and I still don’t know which it was… and that isn’t even the point.  The point I’m making is that this fuzzy, gray-white cloud of a memory most likely only popped into my head right now because of what I, a writer, just did for a fucking paycheck.

Yeah, it’s funny what a few well-mixed, federally regulated, industrial chemicals can do to rip a dead memory from the hard ground of a guy’s head like a cosmic backhoe, under a paint-stained bandanna, just the other side of the blood-brain barrier.

I started working semi-permanent, part-time jobs so I could spend the bulk of my thoughts (at least that’s what I told myself at the time) on what I told anyone who would listen was my next career…

Now, when I’m honest (or drunk), I tell the world (or those in it who still listen) that I’m, “a guy who works two part-time jobs… and blogs”.

And like the song clue at the top tells you (if this was a movie, it would have been playing in the background on a car radio), last week’s Libertarian drug flashback went and turned itself into its own bullshit crisis of conscience-slash-artistic epiphany… all in the hour it took to paint a mildew stained, six-by-thirty, cinder block and drywall storage unit, deep inside an unventilated apartment garage.

God, how toxic primer can make you think, while it kills the handful of brain cells you have left.

In the week since what I now refer to as “The Afroman Epiphany” forced me to re-evaluate the choices I’ve made for becoming a handsomely-paid writer, it wasn’t till Day 6 that it came to me.  Nobody who wants to get paid for thinking up cool new ways to use the same old words already used (but better) by other (dead) writers, should ever have to work in a Huffer’s Paradise of well-mixed, federally regulated, industrial chemicals… no matter how pretty they make a cinder block and drywall storage unit… not even if your name is Charles Fucking Bukowski.

And no amount of white paint on a dirty old bandanna should ever be enough to cover up the memories that remain for why a writer writes.

All rights reserved by the author.